There are three types of people in the world. Those who jump into the water without learning how to swim and that try to figure it out once drowning. Those that don’t put a finger inside the pool until they have read the magnum opera about swimming. And those that find their way in the middle.

While in real life matters we tend to pursue the third way, when it comes to researching for a creative project we might find ourself indulging more in the first or second possibility. Or we don’t start until we are sure to know everything on the subject – and that sounds like an excuse not to start, doesn’t it? – or we write without doing any kind of research.

Your idea is to write a medical series? There is no need to become a doctor but sure, if you write and you have no notion on the concept, this will surely show at some point. The faith your audience have in you will fade and nobody  would watch your series again.

So, how to balance researching and creative work?

There are many ways, it depends on the person. Famous screenwriter Steven de Souza, for example, doesn’t like research to interfere with his creative flow, so he first writes an emotionally driven draft, and then does the research it needs. Michael Schiffer likes to live and breath what is writing about, so he not only buys DVDs and books on what he is writing, but also tries to travel to the locations he wants to describe and to stay with the people that inspire his characters.

Of course, everyone will have their own method. But, since doing a great project might take a while, I think that is important for you to do your research in a way that it enforces your creativity.

One of the best examples I could think of is my best friend writing her first novel. As she started what was going to be the first volume of a trilogy, my friend didn’t know she would have gone that far. Everything had started from a glimpse, a sparkle of an idea she had when she discovered the historical figure of who was going to be her main character. She had started working on the main storyline and the characters but, because she was writing a period novel, she soon found herself in need of learning more about historical and geographical settings. So she started a two way journey. On one hand she was structuring characters and drama, on the other she was researching historical events, cultural details and other elements she would have needed for her story to be credible for her audience.

One might think this work to be very hard and boring. Maybe, but more than once I saw my friend enthusiastic because the knowledge she gained on the subject she was writing gave her not only the ability to solve problems that might have sorted in the continuity, but also to find new ideas for her drama.

If you think about it, it’s normal for us to create in relations of what is close to us. Unless you are some sort of genius, your creativity will in some way be related to what you live and experience everyday. Not to mention all the films, books and art you have encountered in your life. So, the more you would try to immerge yourself in the world, characters and story of your project, the more you and your creativity would be influenced but them.

Why don’t you give it a try? Just remember not to go to far. If you are writing a story about a psycho killer and you go berserk, I don’t want police to check on me for suggesting you to do that. 😉 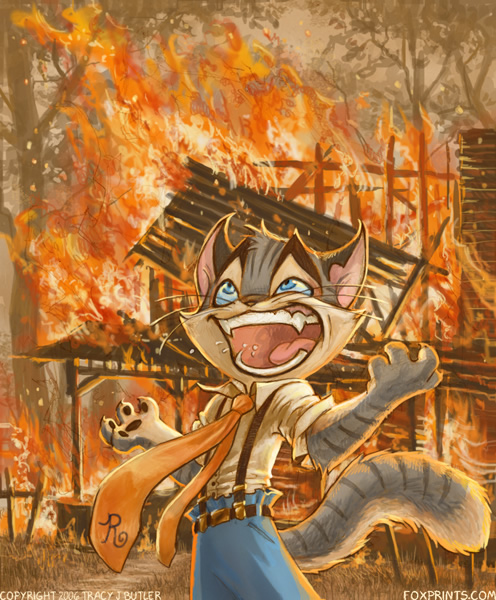 (This image is property of Tracy J. Butler – check her awesome comic)

One thought on “Researching: pain and bliss”

What is going on?